To simulate the remote storage, this sample is using a folder in the local file system on the same machine.

The purpose of this sample is to demonstrate the major features of the IT Hit User File System for .NET and provide patterns for its programming. You will use this sample as a starting point for creating an OneDrive-like file system for your DMS/CRM/ERP and will reprogram it to publish data from your real storage instead of the local file system.

You can download this sample and a trial license in the product download area. You can also clone it and browse the code on GitHub.

By default, the sample will use the \RemoteStorage\ folder, located under the project root, to simulate the remote storage file structure. It will mount the user file system under the %USERPROFILE%\VFS\ folder (typically C:\Users\<username>\VFS\).

To specify the folder that will be used for remote storage simulation edit the "RemoteStorageRootPath" parameter in appsettings.json. This could be either an absolute path or a path relative to the application root.

To specify the user file system folder edit the "UserFileSystemRootPath" parameter in appsettings.json.

To run the example, you will need a valid IT Hit User File System Engine for .NET License. You can download the license in the product download area. Note that the Engine is fully functional with a trial license and does not have any limitations. The trial license is valid for one month and the engine will stop working after this. You can check the expiration date inside the license file. Download the license file and specify it's content in License field in appsettings.json file.

You can also run the sample without explicitly specifying a license for 5 days. In this case, the Engine will automatically request the trial license from the IT Hit website https://www.userfilesystem.com. Make sure it is accessible via firewalls if any. After 5 days the Engine will stop working. To extend the trial period you will need to download a license in a product download area and specify it in appsettings.json

To run the sample open the project in Visual Studio and run the project in a debug mode. In the debug mode this sample provides additional support for the development and testing convenience. When starting in the debug mode, it will automatically create a folder in which the virtual file system will reside, register the user file system with the platform and then open two instances of Windows File Manager, one of which will show a user file system and another a folder simulating remote storage: 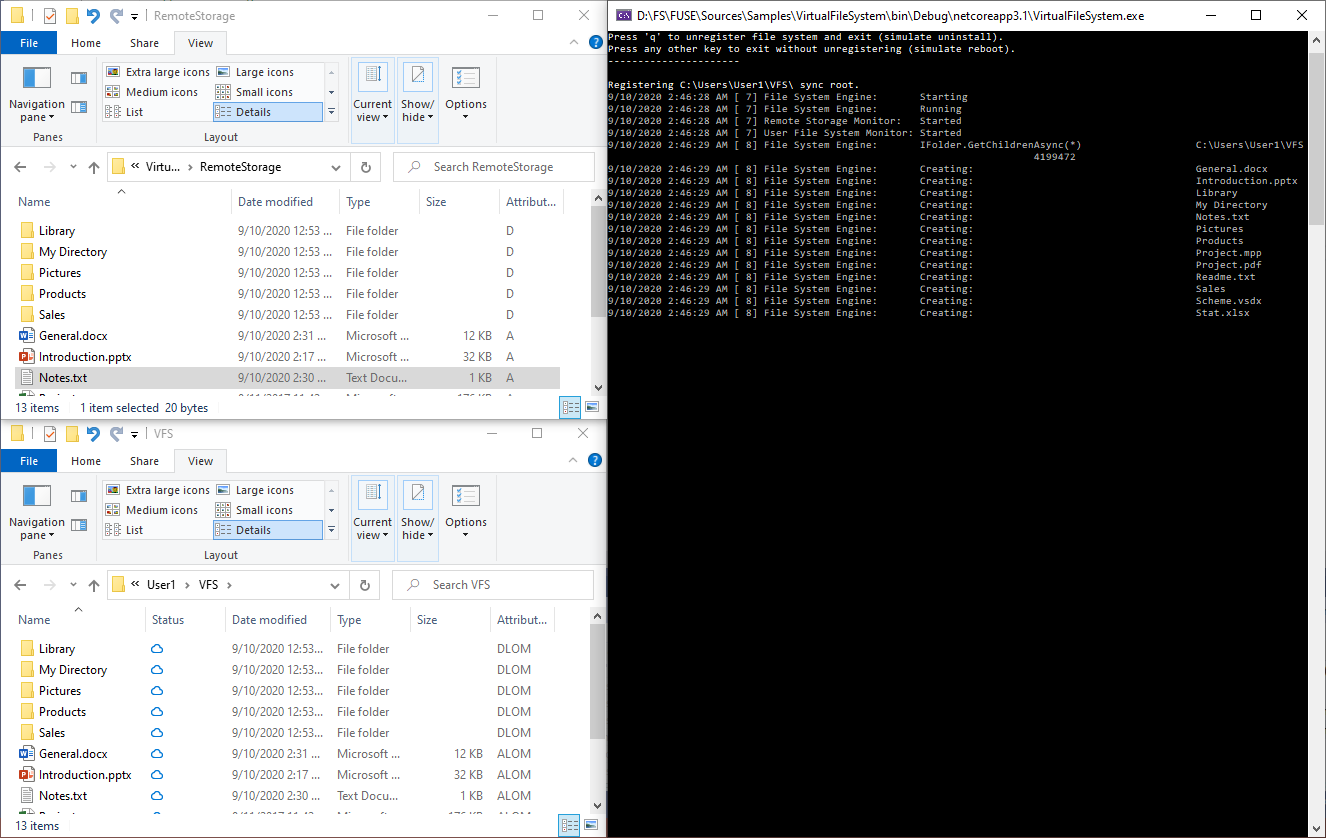 You can start managing and editing files in the \RemoteStorage\ folder immediately after the Windows File Managers open and will see all changes being propagated to the user file system. You can also edit documents and manage file structure in the user file system and all changes will automatically appear in the remote storage folder.

This sample implements on-demand loading. After running the sample all files and folders are marked with a cloud icon

, which means that the content of this file or folder is not available locally but instead resides in the remote location. Even though the file shows the correct size in the Size column, the file occupies zero bytes on the disk. You can open the file Properties dialog to check the "Size on disk" value. You can see in the console log that only root folder files and folders placeholders are being created when Windows File Manager listed the root folder content. Folders located deeper in the hierarchy are not loaded, until their content is being requested by the platform file system calls.

When any application is accessing the file, located under the \VFS\ folder, opening it for reading or writing, the operating system redirects the call to this sample, which loads file content from the remote storage folder. The file becomes marked with a green check-mark on a white background icon

, which means the file content is present on the local disk:

The Windows File Manager provides the "Always keep on this device" and "Free up space" context menus, which are standard menus provided by Windows OS. If you select the "Always keep on this device" the file or entire folder structure will be recursively loaded to the local disk and all files content will be loaded to local disk and will become available offline. All files and folders are be marked with a pinned file icon

. Pinned files will not be deleted from the drive even if it runs low on space. 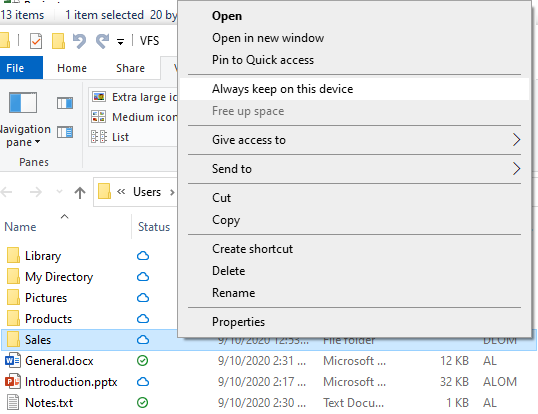 To remove content from the local disk select the "Free up space" menu. It will restore the cloud icon

When a large file is being downloaded from the remote storage, this sample submits progress reports to the operation system, to show a standard Windows "Downloading" dialog. At the same time, the Windows File Manager also shows progress in the files list view:

You can exit the sample running in the debug mode in 3 ways:

How the Sample Works

As soon as the folder content is populated with placeholders during the first access, the GetChildrenAsync() is never called again for this particular folder. Instead, to update the folder content, this sample monitors changes in the remote storage and applies them to the user file system. See the "Remote Storage to User File System Synchronization" section below.

When the user selects "Always keep on this device" or the "Free up space" in the Windows file manager, the file is marked with a Pinned or Unpinned attribute respectively. The hydration/dehydration itself is performed later when the UserFileSystemMonitor class detects attribute changes in the user file system or during the synchronization process by the SyncService class.

The remote storage is simulated by the dedicated folder in the file system (\RemoteStorage\ by default). The sample monitors changes in it using RemoteStorageMonitor class that generates events and applies corresponding changes in the user file system. The RemoteStorageMonitor class is using FileSystemWatcher which can monitor the creation, update of file content and attributes, deletion, and rename. The FileSystemWatcher class can NOT monitor the move event. In your real-life application, you will replace the FileSystemWatcher with web sockets or any other technology that will send events from your server to all connected clients.

The user file system to remote storage synchronization is performed by VfsFile, VfsFileSystemItem, and UserFileSystemMonitor classes:

The complete synchronization is performed in the SyncService class. Due to the nature of this sample, this class goes folder-by-folder to synchronize the entire file system. This class first processes moved/renamed files and folders and then creates, deletes, and updates files and folders.

Because of the simplicity of this sample, the files deleted in the user file system, then this Virtual File System sample application was not running, or during network or server outage, are not synched to remote storage (they are normally deleted inside VfsFileSystemItem.DeleteAsync() call). Instead, the file will be restored in the user file system when the synchronization service runs.

You can adapt the SyncService class implementation to your needs depending on your remote storage type.

When listing folder content the client reads file ETags and saves them in local file system. When sending modified content to the server, the client attaches the saved etag to the request. The server compares etags to ensure the file was not modified on the server since the file was read by the client. In the case of Microsoft Office documents, etags provide one more level of protection against overwriting server changes in addition to locks.

Synchronization in this sample is based on In-Sync file status as well as on the ETag received from the server.

icon). If the file is modified on the server and is marked as not In-Sync on the client, the files are considered to be in conflict and the conflict icon is displayed.

When any file or folder on the client is updated, it is marked as not In-Sync

WebDAV Drive Sample in .NET, C#
Cookies
This site uses cookies and similar technologies to offer you a better browsing experience, for analytics and measurement purposes and to provide social media features. Cookies are also used to develop and serve targeted ads and for similar purposes.